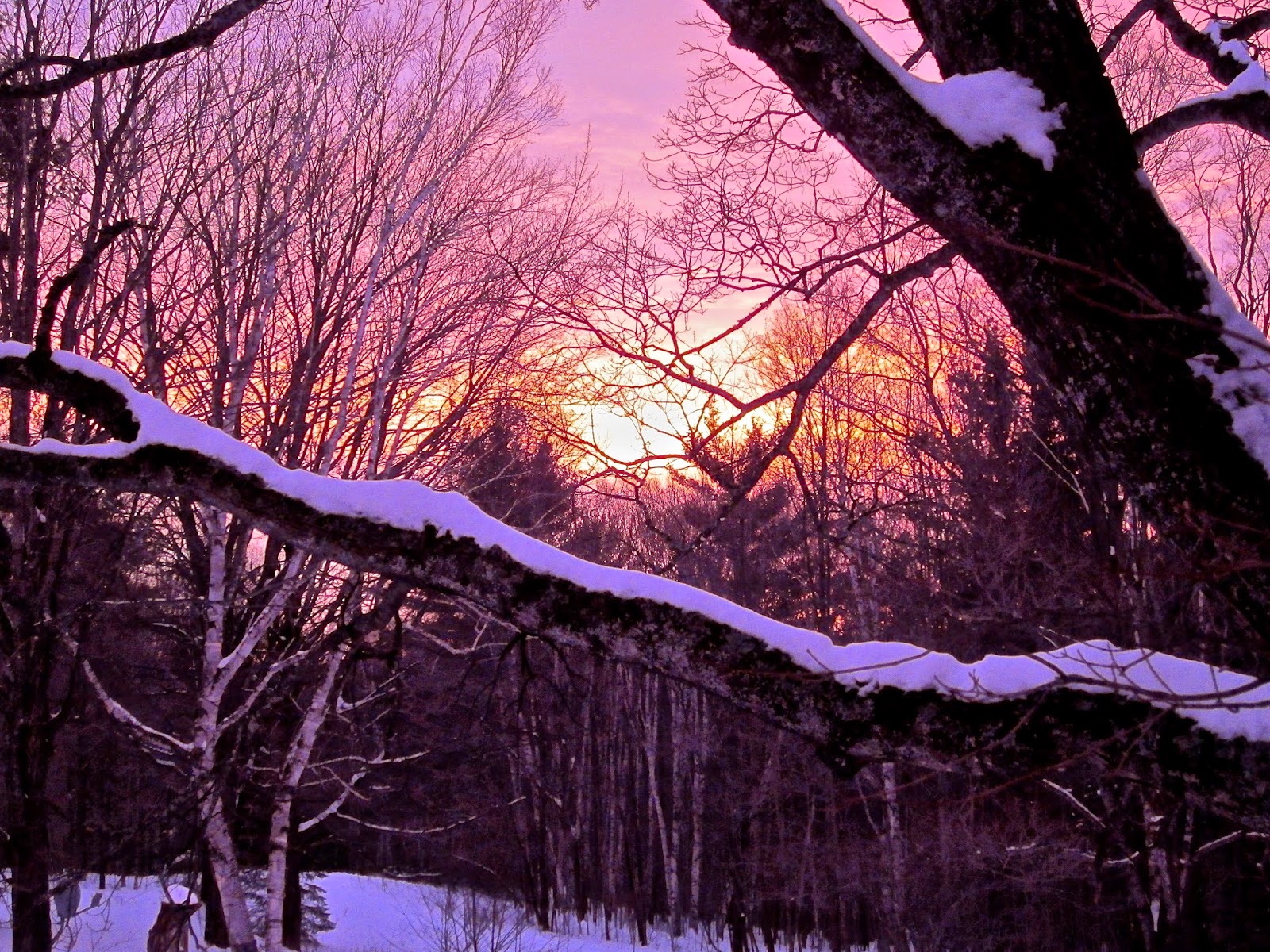 yesterday morning the sunrise created a pink/orange band
extending 360 degrees around the property...
a wide line of color enclosing the emerging blue sky above it...
for a brief few minutes even the snow seemed   pink...
Posted by Rob Sieminski Ceramics at 7:16 AM No comments:


For Mr. David Lipman, Esq.  and his insistence
that I would have been better off working in a 7/11 for the last 40 years...


THE FIRING
For Les Blakebrough and the memory of John Chappell


Bitter blue fingers
Winter nineteen sixty-three A.D.
showa thirty eight
Over a low pine covered splay of hills in Shiga
West-Southwest of the outlet of Lake Biwa
Domura village, set on sandy fans of the sweep
and turn of a river
Draining the rotten-granite hills up Shigaraki

On a nineteen-fifty-seven Honda cycle model C
Rode with some Yamanashi wine "St. Neige"
Into the farmyard and the bellowing kiln
Les & John
In ragged shirts and pants, dried slip
Stuck to with pine needle pitch
Through peephole white blast glow
No saggers tilting yet and seegers bending
Neatly in a row--
Even their beards caked up with mud and soot
Firing for fourteen hours. How does she go.
Porcelain & Stoneware: cheese dish. Twenty cups.
Tokuri. Vases. Black chawan.
Crosslegged rest on the dirt,
eye cocked to smoke--

The hands you layed on clay
Kickwheeled, curling,
creamed to the lip of nothing
and coaxt to a white dancing heat that day
Will linger centuries in these towns and loams
And speak to men or beasts
When Japanese and English
are dead tongues.

Gary Snyder
from " The Back Country"

Posted by Rob Sieminski Ceramics at 5:24 AM No comments:

The Natural World is filled with energy of all kinds...
vibrant, alive and profound. My efforts at present are attempts to rub up against that energy, hoping to learn and then make it visible in some small quiet way. The goal is for the process to leave an object seemingly not made by a person... but rather something to be discovered or found... as from walking along a beach or strolling through the woods and stumbling upon something curious. It's the wonder that I'm seeking... and some magic... hoping that some day the pieces will possess enough energy to make a Vermont dowser's plumb bob dance...

If you'd like to visit the gallery here, you would be most welcome. Phillips is on RT.4 between Farmington and Rangeley, Maine. From Farmington take RT4 NW to Rangeley. As you pass beside Phillips, look for Edmund's Market on your right. Bog Pond Road is about 4.3 miles from there off of RT4. Look for road sign on right and then my Bog Pond Pottery sign, turn right on Bog Pond Road and go straight back to my place. I look forward to seeing you! and remember cell phones often don't work in this area, so be warned...

I'm an old fashioned dinosaur in this arena and I'm not set up for online credit card use. I know, an anachronism to be sure, but I'm tired of so many people, the banks especially, taking a cut of my work, when they have nothing positive to do with producing it... So, I do it the old fashioned way... If you'd like to purchase any pots, simply email me stating your interest. I will forward you, through the email you provide, multiple images of the pieces in question for your consideration. If you decide you'd like something, I ask that you send me a check in the mail and upon receipt of your funds I'll pack up the piece and ship it to you through Fed Ex Ground... shipping charges vary with distance so a bill for shipping will be included... Should you desire a large piece, I will deliver them personally to your home or office, as they are not replaceable and the risk of shipping can be avoided. That will all be discussed with you beforehand by email... any questions at all, please email me at bogpond@tds.net and I'll do my best to assist you... thank you for your interest...